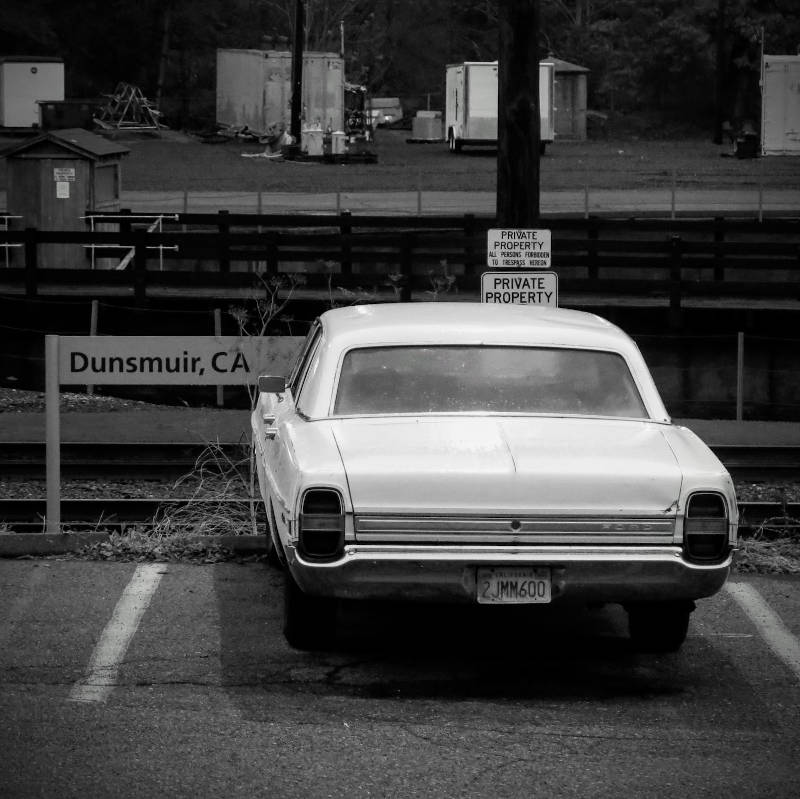 The tarnished grille of the old Ford was nosed up against the rail lines that ran north to Canada and south to Mexico. A railroad cop rolled out of the evening gloom. John Boyd raised a thermos cup in salute, grey eyes peering at the rearview mirror. The yard bull recognized him; a retired engineer with nothing better to do than stare across empty tracks. The cop responded with a flick of his hand and idled away across the empty parking lot. JB sagged back against a saddle blanket spread over cracked vinyl. The thirty-five-year old seat groaned in protest.

He remembered the Ford new, or nearly so. Lorelei had come, moved right over to Dunsmuir and married him. He could hardly believe it. The newlyweds planned to start a family, so JB traded in his Mustang for a 1968 Galaxy 500 four-door.

It was in Denver that he met her. He had been five years with the railroad by then, just turned thirty and working toward being an engineer. Lorelei was ten years younger. The freight crew laid over in Denver, and in those short two days, Lorelei shattered what JB knew of the world. On the next Denver run, she agreed to marry him, eager to get as far away as he could take her.

It wasn’t a year later that Jamie was born. He came into the world while JB was hauling freight to Seattle. Having a baby was a wonderment. The new father marveled at how quickly Little Jamie could change. He would come back from a week-long run to find the baby could do all sorts of new stuff. JB thought it was magic, thought everything would stay just the same, all new and shiny. But somewhere along the line, the thing went off the tracks.

John Boyd sipped his coffee as his eyes roamed the empty tracks. Sure, there were moments, but he didn’t notice them until after. Like coming into the front room where the baby was fussing in his crib, and Lorelei at the window just staring off at nothing.

Lorelei left him while he was on a run to San Diego. He came back to an empty house, all the kid’s things gone and a note on the formica table in the kitchen. You could do that back then, just disappear. That’s exactly what Lorelei did. She disappeared. That was the second and last time that JB’s world was shattered like glass. He tried looking for her, even hired a private detective, but nothing came of it. After that, he just stuck to railroading.

JB winced at the bitterness of the coffee. He fished a pint bottle from the side pocket of his canvas work coat and poured a slug of bourbon into the cup. He tasted the doctored coffee and ran his mind back over the years. Jamie would be about thirty-two by now, old enough to be in the seat of a locomotive. If he sat here long enough, JB might just catch a glimpse of his son, head leaned out the side window of a big diesel-electric, eyeing the tracks for trouble. 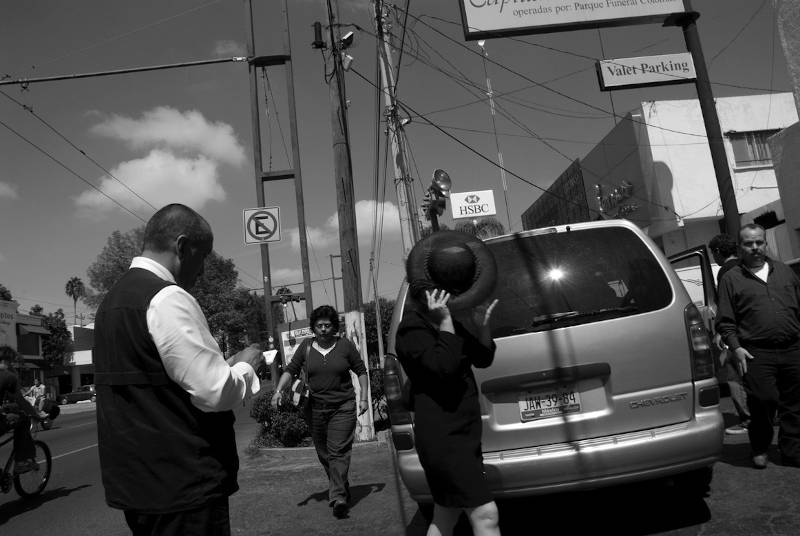 Lauren Byrne walked to the Mexican funeral parlor secure in the knowledge that she could still turn the heads of men. Past fifty, and yes, plumper than she once was, the contours of her mourning dress still attracted looks of longing. It was true that the heads she turned were flecked with gray, but that was fine with her. The older caballeros were refined, easier to bring to heel, and generous. She was about to bid Vaya con Dios to a man who had possessed all of those traits.

She threaded past the idlers and parked cars that lined the busy road. The late morning sun baked into her black moiré dress. A license plate caught her eye, the word California hovering in red cursive above blue numbers and letters. Propelled by instinct, her right hand shot to the brim of her black hat. In one fluid movement, the hat was in front of her face, a shield against prying eyes.

Three decades gone and she still felt the need to hide her face, to protect the place she had carved for herself in this world. Lauren believed in being careful. She would never go back to being Lorelei, the little princess chained in a dingy room.

Why did men want to trap women like pretty things in a snow globe? Like her father back in Denver, wanting her to stay forever. She grabbed the first chance that came along. She thought John Boyd would be her prince, but married life in Dunsmuir was no better than her father’s prison.

She remembered JB coming home from his little train rides, gone a week and expecting everything to be just the way he left it. He treated her and the baby like artifacts, insects caught in amber to be displayed on a mantelpiece.

Lorelei learned hard lessons in that bungalow, but once she learned them, she held them close. She would never be trapped again, not by anyone or anything. Lorelei packed her new-found knowledge up with her toddler son and fled south. She became Lauren Byrne, a young woman learning to guard her independence in a world trying to take it away.

Jamie grew into the only man that did not try to ensnare her. Memories of her son swirled behind the shield of her black hat. He had been the sweetest of little boys, but his sweetness was tinged with sadness. As he grew to a young man, Jamie was too busy trying to trap himself to bother with her.

Then he was gone, heading farther south, away from everything he knew. Did he make to Machu Picchu, or Tierra del Fuego, all those places he talked about? His last postcard came from Quito, but that was years ago.

Lauren stepped into the cool dimness of the empty funeral parlor. The formal service would come later, and a crowd of the dead man’s friends and family. She would not be in attendance.

She fitted her hat back to her head and composed her hair. At the center of the foyer was an illuminated glass case housing a statue of Our Lady of Guadalupe. One corner of the glass case was cracked. A jagged line ran across the reflected surface. The moment was broken by a somber figure stepping from the shadows. He greeted her with quiet formality. One hand raised, the black-suited man ushered Lauren towards an open doorway. 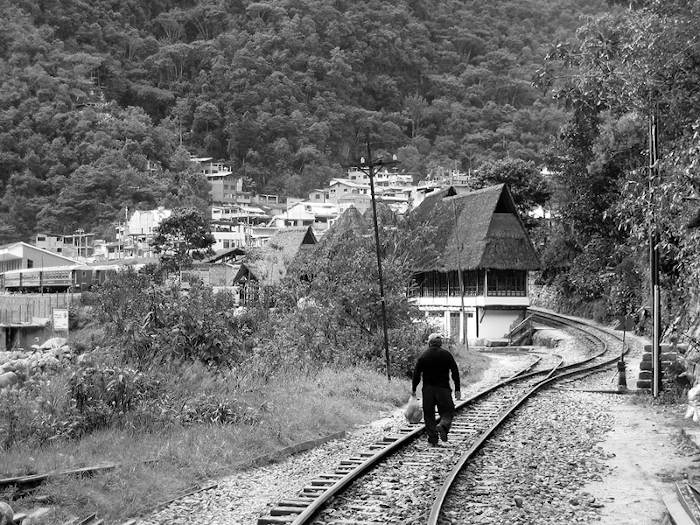 Luis Alvarez walked between the steel rails, his slow steps matching the spacing of the timber railroad ties. A heavy plastic bag swung at his side and the thin handles dug into the flesh of his left hand. The discomfort was a welcome distraction. Thoughts of the gringo had taken up his whole morning. It was not good for a man to chew too long on the same meat.

The bulging bag held food of the kind that required no cooking. The gringo was not safe with fire, whether from bad luck or the demons in his head, Luis did not know. Jamie was his name, pronounced in the odd way of people from El Norte. He spoke rarely, and then with the accent of one from Mexico, his Spanish peppered with strange words.

Luis knew almost nothing of Jamie or how he came to the village. As much as he could judge such things, the young man seemed the age of his own son, now married and gone. Luis rented Jamie the small hut behind his house before he learned that the gringo suffered from demons. It was after the fire that Luis came to understand. When he sat with Jamie and listened to him speak, Luis saw the trouble in his eyes. By then it was too late, for the ghost of Luis’ dead wife had become fond of the gringo.

Jamie liked to sit on the covered porch outside the hut. The sagging wooden platform faced the empty railroad tracks. There were two old cane chairs beside the door. When he could, Luis sat with the young man. The two watched silently for a train that came twice a week. The rare appearance of a locomotive would cause Jamie to smile, and sometimes to speak.

As Luis walked, he thought about his conversation with the young priest from Cusco. It was difficult to speak with a priest not of the village, a man younger than himself. But Luis had promised his wife he would stay with the church, so that morning he had gone to the padre to seek advice.

The city priest listened gravely. He asked if the young man was Católico. Luis said they had not spoken on the matter of religion. The padre suggested that perhaps the demons were an illness of the mind. Luis was willing to care for the young man and the church might be able to help as well. The Lord would surely smile on such work. If the officials learned of the gringo, they could send him to some big institution. Luis left the church with the padre’s advice in his ear, and also the whispers of his dead wife.

The wooden stairs creaked as Luis climbed to the porch of the old shack. Jamie turned at the sound, and on his face was the sweet smile of a young boy. Luis held up the bag of groceries and Jamie nodded in thanks. He reached out a hand to pat the empty chair beside him, then swept his arm out toward the railroad lines. Luis lowered his weight into the chair and laid the bag on the plank floor.

Reaching out a gnarled hand, Luis squeezed the gringo’s shoulder. Jamie nodded again and smiled; his arm still raised before him. Luis’ eyes followed Jamie’s outstretched hand as it traced the twin ribbons of steel from the steep mountainside to the valley far below.

Marco Etheridge lives and writes in Vienna, Austria. His work has been published in Canada, The UK, and the USA. Recent credits include: Dream Noir, The Opiate Magazine, Cobalt Press, and Blue Moon Review. His non-fiction work has appeared in Jonah Magazine, Route 7, and Bluntly Magazine.

... The line spacing is double. Double. So it can fit both the reader and the author. The little cracks are little traps ...