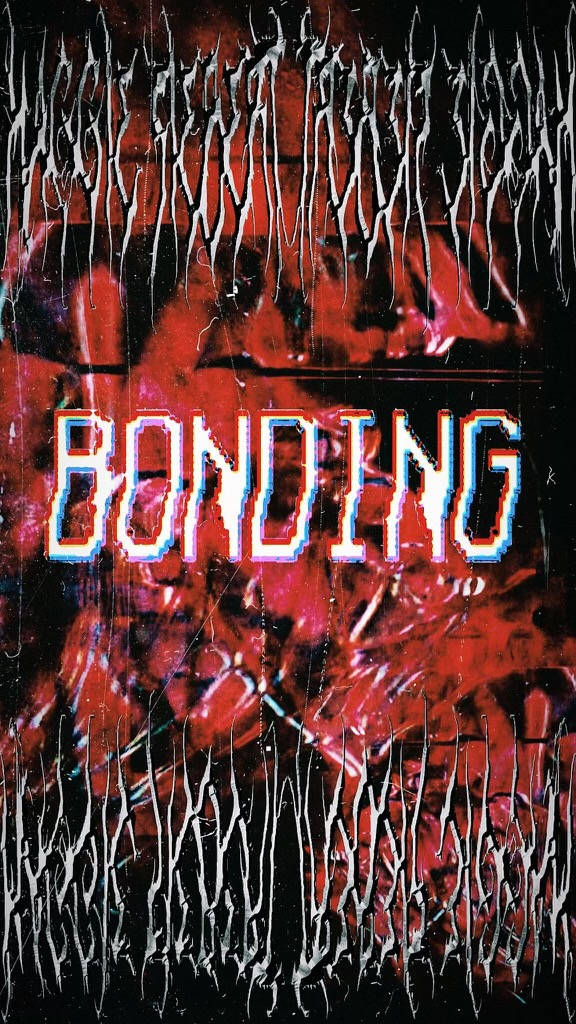 A thorny row of black metal calligraphy festoons the top and bottom, like a pair of gaping fangs ready to snap your fingers off. The red and black background is what appears to be a blurry mass of gore—bone, muscle, blood. Through a haze of static we see woozy letters emblazoned across the middle, a distorted message projected from an analog graveyard. You try to place where you’ve seen it before. A worn VHS plucked from the horror aisle of some backwoods rental shop? A scratchy demo tape recorded just prior to the band’s ritualistic suicide? No, dear reader, this isn’t some harsh noise fever dream. This is Maggie Siebert’s Bonding.

I sat down with a copy on a sweltering June day. Temperatures nearing triple digits. No A/C. Steady stream of perspiration leaking from every pore in my body. Slightly dehydrated, faintly lightheaded. Ideal reading conditions. Figured I’d do a story or two then take a break. Instead, I finished the whole damn book in one go. I tried to remember the last time I’d done that. Probably Jane Eyre in college after procrastinating up until the day before I had to turn in an essay on the eldest Brontë’s tedious masterpiece (I prefer Emily). Maggie Siebert is like the madwoman in the attic if she had spent her confinement watching Faces of Death on a loop instead of aimlessly wandering the halls of that gloomy gothic manor every night. Give it a rest, Bertha.

The dozen stories that comprise Bonding are some of the sharpest I’ve read all year. There’s an addictive quality to Siebert’s writing, like pork rinds dusted with adderall. Perfect bite sized pieces that never outstay their welcome, yet somehow linger in the mind long after reaching the last page. How the hell does she do it? Siebert wastes no time. Each story tosses you face first into a neatly self-contained universe. Narrators divulge everything you need to know and nothing more. There’s no haranguing, no laboring on unnecessary details. A pet dog mutates into a Rob Bottin monstrosity in “Best Friend.” A woman’s necrotic tooth emits an odor so foul it precipitates the apocalypse in “Smells.” A janitor at a sex hotel puts their fist through a perv’s stomach Riki-Oh style in “Messes.” Maggie Siebert is the poet laureate of Tromaville.

Even at their most hyper fantastic, these stories are made all the more striking because they feel almost plausible. There’s a perfect balance between excess and restraint, as Siebert writes with a clever nonchalance. The narrator of “Opportunities,” a former cage fighter with a spotty memory and a gambling addiction, casually remarks, “I try to look around and notice my left eye isn’t going anywhere, and then realize that’s because it’s no longer in my head.” This sense of understatement is used to remarkable effect throughout the collection. It catches you off guard, making the stories consistently surprising and unpredictable.

Part of the surprise is how Siebert juxtaposes humor with horror. “Witches” opens with a vivid description of a five year old boy’s corpse. “He wore a cowboy’s vest, child’s Levi’s with an elastic waistband and a t-shirt that said ‘Who’s the Man?’” All it takes is that last little detail. You shouldn’t laugh, but you will. Bonding is full of these sly, darkly comic moments. The characters in “The Prime Minister” are more concerned with a game of Uno than the interdimensional Lovecraftian monstrosities eviscerating their friends’ genitals. In the same way Sam Raimi uses slapstick to wink at the viewer when ratcheting up the gore, Siebert lets us know it’s okay to have fun when the severed limbs start flying.

This isn’t splatter for splatter’s sake though. “Coping,” a sort of mash-up between Michel Gondry’s Eternal Sunshine of the Spotless Mind and Brandon Cronenberg’s Possessor, features outrageous moments of violence. “She clicked the garden shears together and drove them through his eye, feeling it bend from the pressure before the tension broke and it popped, like biting into salmon eggs.” Yum. As intense as the violence can be, the emotional depth is always stronger. I connected with these characters, felt genuine pangs of sympathy ripple my calcified heartstrings. In the title story, father/son bonding reaches extreme heights, culminating in a fight to the death. “I need you to know that I love you,” father tells son before breaking his nose. The pathos is potent, the bloodshed unflinching.

Siebert keeps the collection fresh with formal experimentation. “Ammon” is presented as an interview transcript (reminiscent of King’s Carrie). “Marriage” is part stage play, part disembodied voices conversing from the ether. “The Alumni Association” feels like a taut thriller, but instead of running from a crazed psychopathic killer, our narrator is desperate to escape making a charitable donation to their alma mater (same diff). The final story, “Every Day for the Rest of Your Life,” is perhaps the most haunting. Told in the second person, Siebert injects us directly into the dread fueled narrative. “You have a project that demands all your focus now. You’re going to finish what started many years ago.” Without giving anything away, let’s just say I’m taking a break from eating meat. Thanks, Maggie!

Bonding marks an impressive debut from a young artist whose clarity of vision never fails to astound. Siebert’s voice is one to savor, her muck filled world ripe for wallowing. If you, like me, graduated from Goosebumps to Guinea Pig, quit wasting your time reading this review and go score Bonding from the joyous lunatics running Expat Press. Whatever Maggie Siebert does next, you can bet your ass I’m buying a ticket.

Matt Lee is an actor, teacher, and writer from Maryland. His work has been featured at SURFACES, Tragickal, and Occulum, among other venues. He has produced numerous original works for the stage with Maryland Ensemble Theatre. He tweets @Gallows_Ticket

... My hoarse voice—nothing here to please me—contact lenses in the dust ...