On a childhood trip to a natural history museum, the name of which I can’t remember, I noticed an officer roping off a corridor. Blocked from me, that hallway’s marble tiles hit the horizon. As my imagination jumped over the barrier, the real bones around me disappeared, collapsing like cardboard scenery. My mind fell into what-ifs—maybe animals had escaped, maybe some collections only opened at night, maybe there were whole exhibits made of human skin. In Cosmuseum, Sean McDonell has taken a similar imaginative leap to its largest conclusion: a museum that covers almost all time and space.

Cosmuseum is structured as an exploration of this grand museum. For the most part, a curator guides you in your tour, a voice that is sometimes curious, sometimes mocking, a scientist amused but not too impressed by the ciliates under the slide. Not even the ones in charge seem to know all the facets of how the museum came into being: “The Museum might have a Director. We don’t know. Some museologists believe that the Director does not exist.”

The quote above hints at the real-world parallels that McDonell often travels beside in this book. And that, in turn, leads to one of Cosmuseum’s great strengths: it’s funny.

The absurdity grows from the conflict between the workers and the elites. For example, when one of the cafeterias becomes inaccessible, the museum staff begin to starve. They turn to eating the exhibits. Nothing like chowing down on a zebra.

The punishments are summed up like so: “If someone were to, say, lick a parrotfish, but got no further, they would be flogged and released with a warning … Starvation is no excuse for willful destruction of Museum property. Famine they’ll screech, starvation … Ignore them. They agreed to work overtime, after all.”

The text details the museum’s issues in this way throughout, and the argumentative texture helps to ground the more fantastic details, which McDonell renders vividly. An underwater exhibit has huge crabs that “graze on the scarlet feathers of Pompeii worms, clinging to billowing pipes of tectonic gas. Marvelous sharks of the Devonian turn in lethargic circles amid suspended formations of jelly animals whose bodies look red and velvety, and whales pursue tentacled monstrosities and duel with gigantic anomalocarids.”

The tour structure of the book allows McDonell to examine different exhibits in vignettes. The short chapters give the book a quick, easy pace. There are times when McDonell may have moved on from an interesting moment too quickly (I’m thinking of a chapter on rooftop explorers who are the first to experience rain and thought insane because of their reports)—or an insight is moved beyond with short expansion (“A lost and found is, in itself, a Museum of stray possessions”). It says a lot that the book is overflowing with such writing, and this is no different than being on any tour. The reader will have to accept the guide’s pace or be left at the gift shop.

Sometimes the voice switches to second person, and these are often the most powerful parts of the book. In those moments, you’re no longer hearing about the museum, but being guided yourself. A few times, with this mix in voice, even the satirical sections on corporate control present another layer of feeling. In a passage on one of the museum’s oldest exhibits (night itself), McDonell writes:

“You could watch the ducks sleep on the water, you could rob a couple at knife-point, you could find an empty bench, put a newspaper over your face, and try to forget yourself in dreams.

It is the night. Yours, until closing time.”

Throughout Cosmuseum appears the macabre but playful artwork of Sami Alwani. It is a standout part of the experience and matches the book’s tone (the illustration of the human mold people and their decomposition is like Junji Ito mixed with Charles Schulz.)

The lists of sights goes on: the upside down hall of houses, an organic clock with mechanical blood, the punishment dungeons (where the boundaries have become “unclear”)—as you might expect in an endless museum, there are too many exhibits to go over here.

Cosmuseum is Sean McDonell’s first book and publisher Andata Express’ first prose release, and it shows great things from both. I’m excited to see what they do next. For now, you should go and take the tour. 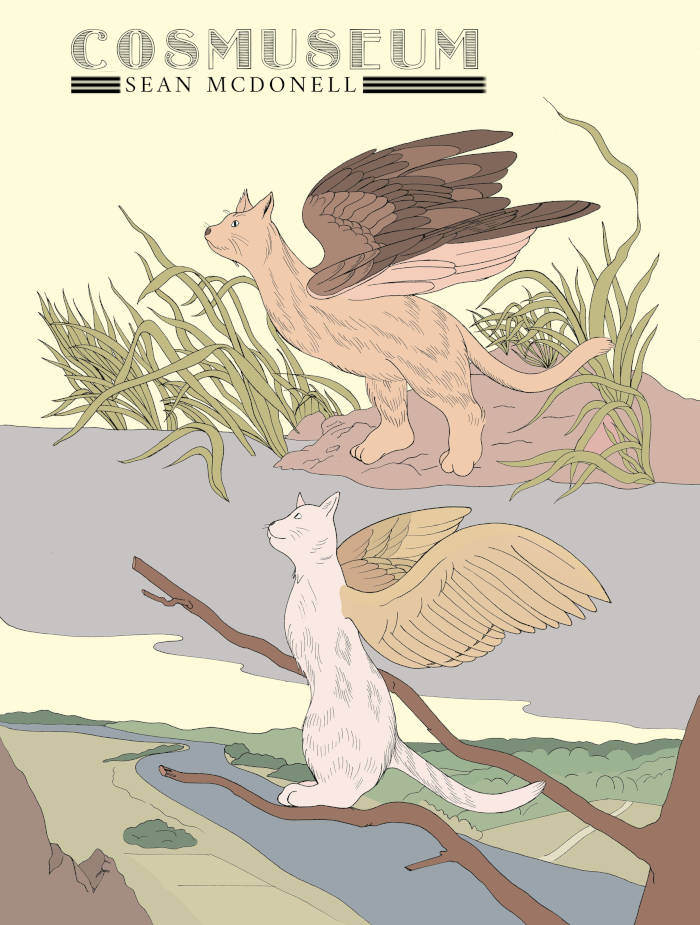 Sean Sam's writing has appeared or is forthcoming in The Malahat Review, The Westchester Review, Salt Hill, RED Ink, and Potomac Review, among other places. Find him online at www.seansam.com.

I Cannot Find the Words That Rhyme with My Own Name