In Mother Winter Sophia Shalmiyev recounts her journey as an immigrant, an artist, and a woman raised without her mother.

In this interview, she discusses art, feminism, process, and the new book she’s working on. 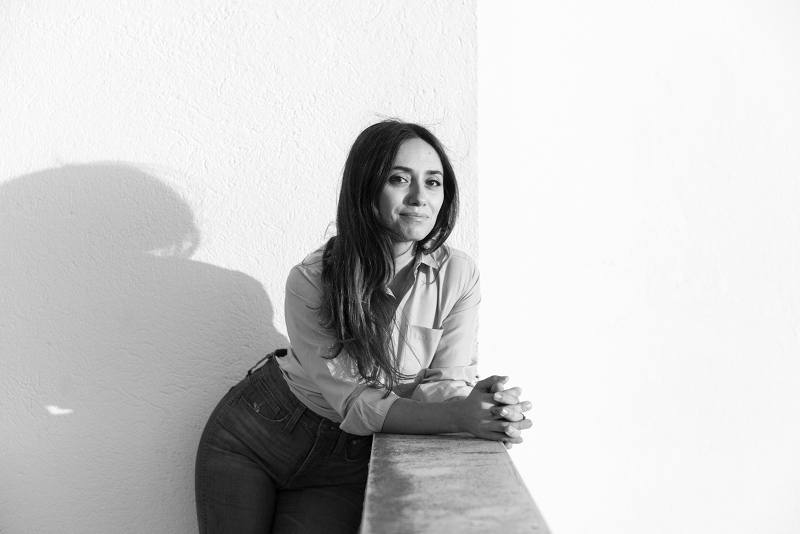 The last time I met you, you mentioned that we are all, in our own way, motherless. What did you mean by this?

I got this idea from the legendary Eileen Myles, and I cannot say exactly what it means to them, but my understanding is that we have been surviving an anti-matriarchy for centuries. If my mother could not be a complete person with a level playing field, and her mother couldn’t have freedom and agency, and her mother was a domestic slave, then how could we possibly have had access to them as a whole. We all have fractured versions of mothers.

In Mother Winter, the tone varies from the poetic to plainspoken. When you delve into past abuse, the language becomes sparse, almost as if you were leaning into a microphone in front of a judge. Was this a conscious choice, an attempt to comment on the way society views women who come forward?

That’s exactly right. I want to take the witness stand as the most logical, terse, unemotional, unpolitical (that doesn’t exist and is a posture) self when I recite the basics of the abuse. None of these voices are authentic or are grounded in reality of human need, yet men have decided they are the gold standard of behavior. Women are not believed. Men do not admit to wrong-doing on any deep level. I’m not convincing or pleasing on the witness stand, but I don’t back down, either. I exist in the courtroom atmosphere at all times. The minute a man feels accused he says I am malicious. Malice implies that I conceived of a transgression and invited it onto myself in order to stage chaos and disorder—that I am out to get a man and destroy him. Any reaction and a call for accountability then has to be labeled as hostility to discredit me. 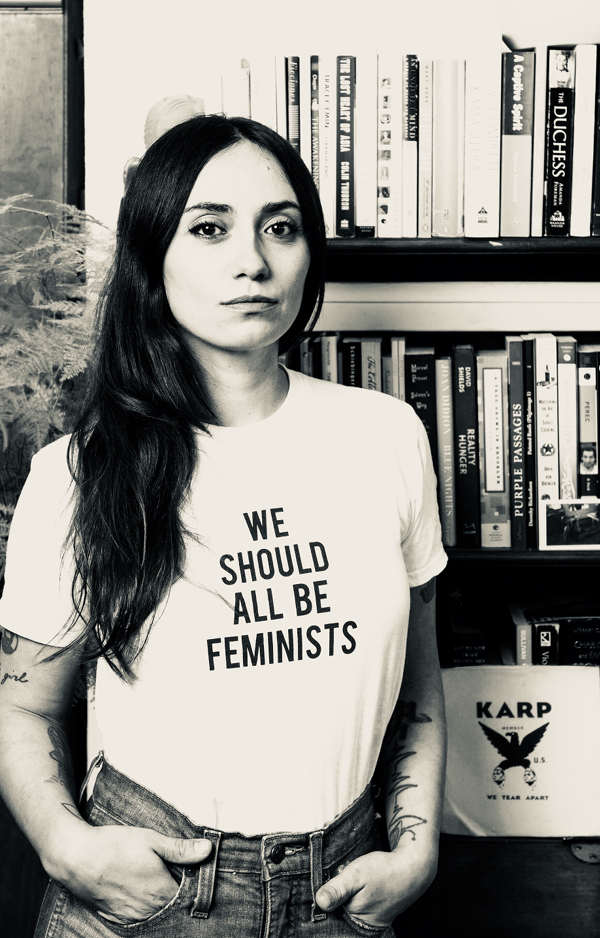 Memoir as a genre seems fraught with legal and personal difficulties. For example, I can’t imagine attempting what our friend Jeannie Vanasco has done with her new book. Were there difficulties in getting the book published?

I had four rounds of legal. I was well protected by good lawyers. Jeannie has her rapist on tape and so she can’t be sued for libel. Her case is actually pretty solid, and that man gave her his consent. My situation was complicated because my father is in my life and so I tried to be protective of his livelihood and his ability to carry on a life. It didn’t affect my writing, but there were a few things I needed to change or tweak. I am ambivalent about that.

“If I could just say this is nonfiction, fiction, and poetry all on the same page, I would.”

You also mentioned rewriting Mother Winter many times. Was there ever a fictional version? Will you write fiction in the future?

There was a fictional version. And I am writing a novel now. It’s called I Married the Butcher to Get to the Bone. I think everything I do is hybrid work. I am a recording device, and I am a problem solver. I hear a thing and want to fix it. Then I write it. I will stay on the facts, but I re-work the air around them and turn to poetry to get at meaning. If I could just say this is nonfiction, fiction, and poetry all on the same page, I would. I don’t want to sell nonfiction again, but who knows.

The New York Times ran a dismissive review of Mother Winter by Alexandra Fuller. She seemed to not understand your metaphors, nor the power of rhetorical questions. Your father was presented with nuance in Mother Winter, not reduced, as she described, to the simple adjectives of dark and abusive. What was your reaction to this review?

The rule is to never talk back to reviews. It is considered bad sportsmanship and tacky. While I don’t agree with this rule, exactly, there were at least three well-thought-out rebuttals published in direct response to the Fuller piece, and they say what needed to be said about stale misogyny sticking around and poisoning the well.

The person who wrote the review comes from so much silver-spooning that I am not sure she could have gotten what it is I was staging in Mother Winter or any of my work. She is tone-deaf enough to be putting out a book—a memoir—about her white colonialist father whom she admires as he brings his fetishism and fake savior complex to Africa, and yet my immigrant father is reduced to dark and abusive in my debut? The white ladies who eat up the drips from her porridge and are mesmerized by her epiphanies about drunk mothers, marriage, addiction, and problematic patriarchs are baffling to me because they are saluting women punching down so long as they are earthy and mainstream-sorry about their privilege.

I do not believe in having enemies or want that kind of energy in my life at all. I think I can forgive her and have empathy for her because she has suffered in many ways, but it doesn’t mean that the underlying cause of such scorched earth reviewing should get buried. We need to understand why a female writer would sabotage us preemptively with the dichotomous expectation of beach reads vs. five-star-level, platinum-status Maya Angelou-esque “true” narratives to put out. That is hogwash; not just unrealistic, but frankly, boring to live in that either/or state of literature.

In Mother Winter, you write, “We all have a propensity for false pattern recognition, to look for meaning, a belief system when the mystery is too anxious of a box to contain us—a story that can signify completeness we have only felt in the darkness of our mother.” Was it difficult to sell the memoir knowing there would likely be no happy ending, no Hollywood-style aspiration story?

Selling a book without an ending, period, is not easy. There is no wave or arc. There is a plot in the structure and the way the protagonist’s life unfolds against the backdrop of ambiguous loss. I think I had the right two (agent meets editor) people, maybe the only two, who saw the potential and wanted to make it live in the world against all odds. It is not a commercial book and there is no reason it should be, but I do wish the entire industry and the promo machine were not such garbage incinerators.

“It’s great when we can step out of the piece and offer the necessities rather than worry about the critique, but it’s difficult to know you can’t please others.”

Throughout the book, you play with different types of sentences. Sometimes you use declarative maxims surrounded by white space (“Restoration is the act of finding a baseline to maintain”). Other times, imperatives (“Say the word foal out loud”). What were your intentions and influences for these passages?

Every single one of these examples is a clue, a fact-finding stage in my search. I can’t search for a body, so I search within language for her and for myself for what I think could best describe us. …Fall, foul, foal, feel…those four words kept coming up again and again to evoke her and I as very briefly engaged as a dyad. And their cadence and alliteration were significant in duplicating the mother-daughter bond I never experienced but somehow still feel in my sea legs I got from being whipped around emigration, by slaps across my face, by dissociating when sexually assaulted. And, also this is my actual second tongue, and I am oddly fascinated by its surprises and hidden meanings.

You use the second person extensively to address your absent mother in the book. Was this a choice early on in the process or did it come later?

I know there is a lot of pushback against using second person. I didn’t deliberately want to annoy or frustrate the intellectual reader who sees it as a device or a prop only. I know what the text needs and it needed all three POVs, so I went with it, unselfconsciously. It’s great when we can step out of the piece and offer the necessities rather than worry about the critique, but it’s difficult to know you can’t please others—I pleased myself and my mother.

How does your art influence your writing or vice versa? Are there periods where you prioritize one or the other?

I definitely prioritize my writing. I write in a variety of ways for a slowly expanding pool of publications—reviews, essays, poems, short stories, and now, a novel. It takes up the majority of my psychic space. When that is depleted or short-circuiting I turn to painting and drawing. I am in my body in a grounded way when I have paint in my fingernails. I need to get back in the studio this summer. I have so many visions of paintings I want to do alongside this new writing project and have let it fester too long.

Finally, I’ve heard you mention the virtues of writing in bed. Should all of us try this and why?

Because we are secreting different hormones when prostrate and entering a dream state. I think that the cortisol of deadlines and sitting upright all stiff is ok here and there but lying down is a more feminine way of approaching the process and I enjoy feeling cozy, comforted, and protected in my lovely bed. I use my favorite coffee shop and my art studio, also, but I believe that where you work does have some juju. Magic is what and where you see it or make it or nurture it. I believe in magic. Say YES.

Sophia Shalmiyev emigrated from Leningrad to NYC in 1990. She is an MFA graduate of Portland State University with a second master’s degree in creative arts therapy from the School of Visual Arts.

She lives in Portland with her two children. Mother Winter (Simon & Schuster, 2019) is her first book.

... Overhead the sun sheds a skin, and it plops to the water, and sinks. Now, brighter, the star. It shines out rotten blood ...

... My friend, drumming his middle finger on the glass, was bred by far worse adversities. He tied fireworks to pets ...