Should scholars call this a new Native American renaissance? Our art has been here—from the ages before colonization, the pictographs enveloping limestone, the totems and masks carefully constructed, often religious in import, all these years of creation existing like a living being, then suddenly mummified, becoming scientific curiosity for another culture, the body of art spread on a slab and dissected, collectors with their scalpels separating the organs, intent on preserving the artistic remains of this “dying” race, a mistakenly intentional vivisection on the living.

Native words too—obliterated at boarding schools. If language is the dress of thought, then it was not enough to kill the body, but the frames of its creativity, the essence of its utterances, also required destruction. So what to call the increase in indigenous publications? Why accept a classical framework?

Maybe focus on the art and artists instead. One such person to watch is Morgan Talty, whose debut collection, Night of the Living Rez, is set on the Penobscot reservation where he grew up. In this book, we meet a family with relatable struggles, burdened by signs of a mysterious trauma. Though the content includes brutality, Taltly treats his characters with understanding and affection.

In this conversation, we discuss his short stories, indigeneity, and craft advice.

Night of the Living Rez is available from Tin House. 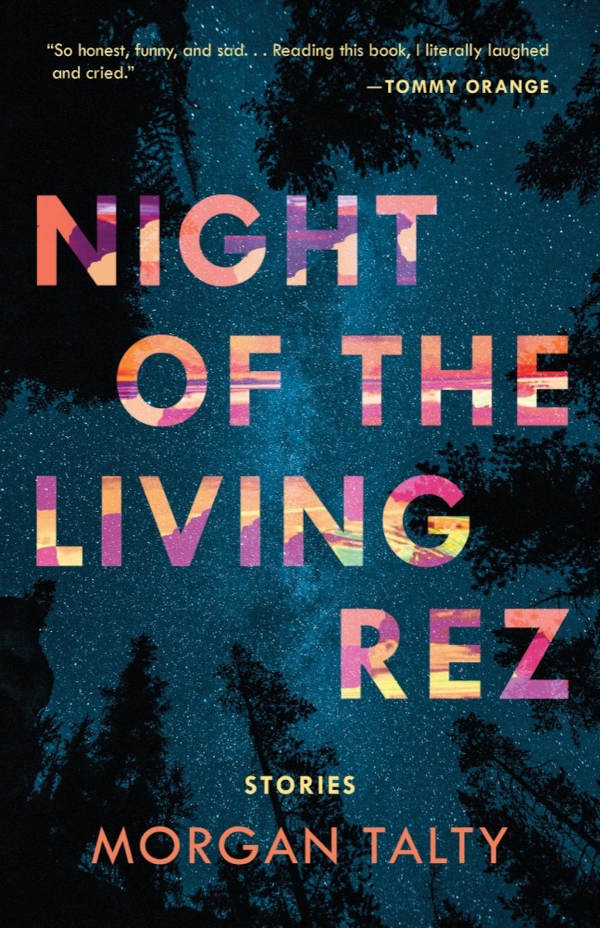 The reader should gradually realize that the first-person narrator of all these stories is the same person—alternating in age and temperament. How did this story collection take shape and was this planned beforehand? Was there a specific moment where you thought, “I’m going to make these pieces into a collection”?

In the strangest way! I originally had written all stories from David’s POV. The stories featuring Dee came about by accident, in truth. I originally had set out to write a story collection from the young boy David’s perspective. The first story I wrote was the title story, “Night of the Living,” and I wrote that back in 2015. In that story, David is about 18, so I gave myself a target: I was going to write the collection in chronological order, starting with David as a boy and moving toward that final story. I then wrote “In a Jar” and kept going until I had about 15 or 16 stories, all David’s POV. But then I looked through them all and was like, “What’s the point? Sure, some of these are good, but the collection is . . . boring. It’s just these stories.” So I said, “Whatever, I’ll do something else.”

It was around this time that I had heard a story about a guy getting his hair frozen in the snow, and I had tried to write about it as nonfiction, but I was too far removed from the actual story to do it any justice (I felt), so I decided I’d write it as fiction. I’d also had this name coming to me for weeks—Fellis—and so I thought, “All right, I have a secondary character, let’s write this story.” That story became “Burn,” the opener of the collection. As I was drafting the story, I got to the line where Fellis says: “Get me out, Dee,” but I didn’t know what the main character’s name was. I was so used to writing from David’s perspective that my instinct was to call this character David. But I didn’t want to write him, so I just put in the letter “D” as a place holder.

But as I revised and revised and revised and kept asking, “What the hell is this character’s name?”, I realized it was “D,” with two e’s. Then I realized that this was part of the collection, that this man was that boy, David (spoiler? Don’t think so!). So then I had a new urgency to write this book. I chose the best of the bunch from that first draft of 15 or 16 stories and then wrote a ton of Dee and Fellis narratives. I saw the stories as standing alone, but also as being connected and suggesting a larger narrative arc, so I tried to nurture that as best as possible.

The characters in the story are well-rendered and familiar. A few of them are on methadone. An interesting aspect is that we generally see them in recovery, not in the manic state of using. Why did you choose to show them this way?

You’ve said that this is a story collection about people who happen to be Penobscot. Can you talk about why this is an important mindset for fiction writers (versus deciding to explicitly write about being Penobscot)?

It’s impossible to write about an entire culture—I only have my experience and relationship to my culture. If we start to assume we speak for that culture—our culture—we run the risk of monopolizing the “market” or the space where stories can exist. We can end up silencing our own people.

In your interview with David Naimon, you discussed Treuer’s phrase “exoticized foreknowledge”, an assumption that alters how X is perceived in relation to the history of Native people. But understanding a text’s meaning is an emergent process, interacting with language, history, etc. Without a time machine or control of curriculum, this foreknowledge can’t be escaped. How should writers like us deal with this?

In my view, I think we should be conscious that readers may have different takes on texts, and so we should be careful not to fuel or perpetuate ideas for emotional gain or even financial gain. It’s easy to give readers what they want—we just copy what others are doing or what people think. We have to cut against the comfortable.

As a writer, when do you get conscious of such things—during creation or revision? Are there passages you excised from this book for that reason?

Definitely during revision. The creation process has to be unhindered—it’s all about discovery, even if that discovery is junk. You want to let your mind go where it will go. And I imagine there are many passages I cut for that reason, but none come to mind! I will say my early, early writings when I first started were FULL of terrible hackneyed tropes that make me cringe thinking about them. But, I learned and kept at it.

What authors or books would you say influenced this one the most?

A question I’ve asked to other authors: what is the best and what is the worst writing advice you’ve received?

Best: Make something inexplicable happen, then work to reconcile it, to make sense of it, and be specific.

Worst: Anything that goes, “You should do x, y, or z—that will make it so much more interesting!”

Thanks, Morgan. Can you tell us about your next book?

My next book, a novel called FIRE, EXIT, is about the consequences of blood quantum.

Morgan Talty is a citizen of the Penobscot Indian Nation where he grew up. He is the author of the story collection Night of the Living Rez from Tin House Books, and his work has appeared in Granta, The Georgia Review, Shenandoah, TriQuarterly, Narrative Magazine, LitHub, and elsewhere. A winner of the 2021 Narrative Prize, Talty’s work has been supported by the Elizabeth George Foundation and National Endowment for the Arts (2022). Talty is an Assistant Professor of English in Creative Writing and Native American and contemporary Literature at the University of Maine, Orono, and he is on the faculty at the Stonecoast MFA in creative writing as well as the Institute of American Indian Arts. Talty is also a Prose Editor at The Massachusetts Review. He lives in Levant, Maine.

On Going to See Francis Bacon's Man & Beast with S/Z

... the preceding drawings are already hallucinatory ...

by Noura Sarayel and Viola Volée

... The life of a conscious thing consists entirely of consciousness ...