In a book with a name close to Gina Nutt’s debut essay collection, Loren Eisley wrote, “my thoughts are all of night.” It’s there that we are most comfortable with the dead reanimating. Often too the living, still lingering features of ourselves find ways to slouch through. This is the space Gina covers in Night Rooms.

The rooms can fit all sorts of loss, even the kind not fully realized. In one of the sentences that stayed with me long after reading, Gina writes:

“Mourning is elastic and necessary, and not exclusive to death.”

Throughout Night Rooms, you use a variety of movies—from The Night of the Hunter to Titanic—to approach issues like depression, suicide, and death. In one of your essays, you write, “If we attach ourselves to art, maybe art can attach itself to us. Do I find the movies or do they find me?” What made you choose films as the primary way of navigating the issues in the book? Was this a design principle that began early in the writing process?

The first essay I wrote orbited death, anxiety, and It Follows. So, films figured in my earliest writing toward this book, but it took me time before I let myself say I was writing a book. I like to let my writing wander in the early stages and see what happens, where it goes. I may write into a mood, line, or image. If something I journal holds my interest, I’ll circle back, transcribe, and expand in a Word doc. For Night Rooms, I kept coming back to that first essay I wrote, continuing to write about additional personal experiences and movies, so I followed that momentum, as well as new threads that came through as I wrote.

Speaking of images, when I first read some of the book without knowing your past writing, I could tell that you were poet. Night Rooms is rich in imagery/impressions. Even the films themselves are often not named directly, only described. Who are your major influences both in poetry and nonfiction and how do they affect your writing?

I’ve learned a lot about image from writers like James Tate and Jean Valentine. I love the dream logics, associative currents, and imaginative minds I meet in their poems.

I toggle between poetry, nonfiction, and fiction. So, I’m drawn to the work of writers who write poetic prose, move between poetry and prose, or started out writing poetry and moved into prose. I constantly return to writing by Mary Ruefle, Chelsea Hodson, Hanif Abdurraqib, Sarah Manguso, Ocean Vuong, and Maggie Nelson.

I’m wandering a little here, but short stories also shape the ways I imagine an essay, or a paragraph, could possibly move. A few collections I kept close while writing and revising Night Rooms were: Black Light by Kimberly King Parsons, Things to Make and Break by May-Lan Tan, Jesus’ Son by Denis Johnson, Her Body and Other Parties by Carmen Maria Machado, any and all Joy Williams.

That’s a great reading list. To return to films and TV, there are lots of works you mention that had me nostalgic and focused because I remembered the dialogue or scene but could not immediately recall the source (such as the reference to an unseen monster in the 90s cartoon show Doug). Of the movies mentioned in the book, which had the biggest impact on you and why?

It Follows was the first film I wrote about for this book. Everything about that movie mesmerized me when I first saw it, and it still amazes me. The idea of the malevolent following force, this slow-moving horrible something walking toward us. The music. Jay, the protagonist, also resonated with me as a new take on the final girl trope. She’s not tough-as-nails, infantilized, or hyper-sexualized. Even more though, her running and hiding are enmeshed with everyday activities—attending class, driving, hanging out with friends—so, her fear and proximity to danger are wholly threaded through her life. That sense of inescapable dread hit a recognizable chord for me. 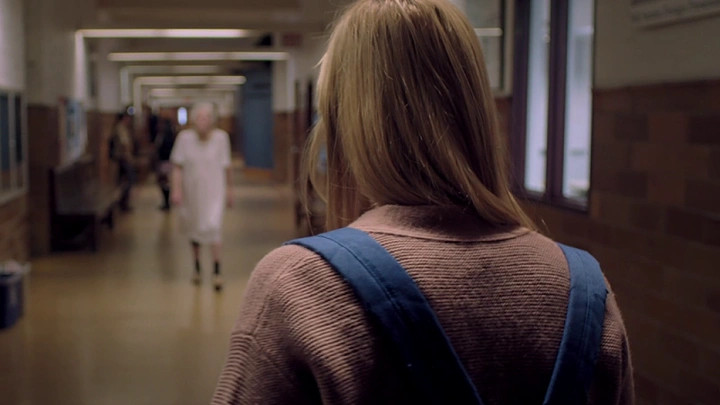 Genre movies and books—especially horror films—‍are often looked down on. But they can be a way to comment on our most primitive fears. What’s your take on the genre/”art” divide? Do you think the modern horror scene has gotten better or worse in terms of tropes like final girls/scream queens?

Imagine the first person who said, “I want to film a ghost descending a staircase. How will I make that happen?” That was a creative problem. Someone solved it. At the same time, another filmmaker could have said, “A ghost descending a staircase? That’s not art. These horses running across a pasture though…” The human imagination is vast enough to accommodate horses in pastures and ghosts descending staircases. Some audiences want ghosts. Some audiences want horses. Ghost-makers and horse enthusiasts alike though, everyone is making creative choices.

Horror films and “art” are so intertwined, talking with and borrowing from each other. It’s a long tradition of tapping into deep fears and commenting on familiar tropes, as you mentioned. And the modern horror scene keeps building off what has been done, complicating the archetypes and reimagining how an audience might experience fear.

Night Rooms doesn’t shy away from holding gory, gritty films and moody, atmospheric films on the same plane. That’s how I encountered the genre and how I continue to know and appreciate it, a panoramic view of endless invention.

Well put and another way that view increases is through new mediums. One that comes up throughout Night Rooms is the Internet; for example, in the chapter on chain letters, you mention urban legends are now creepypastas (one of my early favorites is Ted the Caver). But you also mention it’s possible to be “cached” forever online, whether it be in an angry comment or through a posthumous profile. Is this a good/bad/neutral thing and why?

Posthumous profiles can be a way to honor someone’s memory, comfort the living. I also find them complex because at a point, fielding random tags and comments in perpetuity, absorbing the fresh grief that emerges on a public platform, can become a new wound. I hesitate to commit to a value judgement though because I think it’s specific and personal to each person grieving. Still that we can move from storytelling and creepypastas to maintaining eternal online presences in just a few lines speaks to the Internet’s omnipresence, our enmeshment.

You used to compete in beauty pageants. What was that like? What is a memorable thing that happened at an event?

One thing that emerged as I wrote the essay about my pageant experiences was their dual nature. Participating as a child, I liked dressing up, having my hair and makeup done, but I struggled with the competitive aspect. That’s one of the more vivid memories I have of an event, standing in a mall parking lot after a pageant and making a self-critical remark. My mom no longer signed me up for pageants after that one.

Were you interested in creative writing at that time as well? Why did you decide to get an MFA and what was your experience like?

I wasn’t writing during the stretch of childhood I was in the pageants, but I loved reading. My grandparents on my mom’s side of the family gave me a new book each birthday and holiday. I enjoyed going to libraries around Syracuse, reading aloud to the family cat.

I applied to programs because I wanted to fully immerse myself in writing and reading alongside people looking to do the same. Which ended up being my experience at Syracuse. Some of the writers I read for class, or who peers recommended, became some of my favorites. I liked working across genre, and I appreciated the emphasis on nurturing and following creative tendencies.

Indie publishers like https://twodollarradio.com/ have continued to put out interesting and artistic books. What do you think of the current state of publishing and the major houses/indie divide?

I’ve only ever published with indies and Two Dollar Radio is incredible. They bring such care and attention to each book. They’re my dream press. My bedside is piled with a mix of wonderful books. Some from indies and some from major houses. I love the whole ecosystem. If I read exclusively in one sphere, I close myself off to every possibility beyond, and that’s the opposite of my creative sensibility and how I move through the world.

On death, you write in Night Rooms, “I sometimes miss believing dying meant going to sleep forever …” Where do you stand on religion or life after death now? Has anything changed for you in the process of writing the book?

Writing, for me, is one way to keep questions I can’t answer ever-present. Religion and life after death are still enormous question marks to me. So, even though my thinking evolved alongside the book, and all its revisions, trying to understand these parts of life, among others, is one of many reasons to continue writing.

Thanks for this interview, Gina. As far as horror or thriller movie recommendations, what are some of your personal favorites that people should check out? And finally, what’s next for you as a writer?

Thanks for your thoughtful questions, Sean. I’ll sign off with a few of my favorites: A Nightmare on Elm Street, It Follows, and Dario Argento’s Suspiria. Older films can be fun too, like The Night of the Hunter, Carnival of Souls, and The Creature from the Black Lagoon. Anyone open to exploring horror can appreciate the genre on a level that’s just unsettling enough for them.

As for what’s next, I’m excited Night Rooms is in the world, so right now I’m focused on doing what I can to share it. Eventually, I’ll circle back to a manuscript I stashed in a drawer so I could focus on publication. It’s a different form for me, so I’m excited to sink back into that book when it’s time. 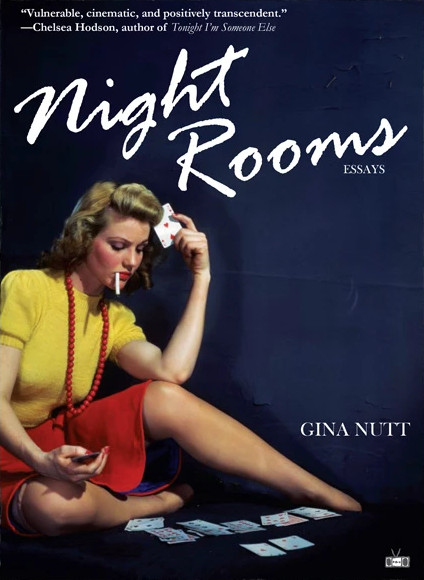 Gina Nutt is the author of the essay collection Night Rooms and the poetry collection Wilderness Champion. She earned her MFA from Syracuse University. Her writing has appeared in Cosmonauts Avenue, Joyland, Ninth Letter, and other publications.

Instructions to the First Cause

... Create matter and shape planets, / and as each is finished—spin it ...