“It’s a blanket with brain matter from a suicide,” stated my new teammate on the first night of my K-9 Search and Recovery training when I asked what was in the jar. “An officer on the scene kept it for me.” It was the first time I had smelled human decay.

“In the UK, you can’t use real human. They use pigs, which gets close, but, for training, there’s nothing like the real thing.”

My K-9, Bowser, had a strong adverse reaction to the smell, and I could not blame him. He reared back after and despite my signal for a reward, he began heading back to the truck.

I must admire the collection of generously donated human accoutrements that I have amassed such as teeth, two severed fingers (one was my uncle’s after a boating mishap and the other a trade: a finger lost in a work accident for a case of Bud Light), lots of my own blood dried on various materials, and six small mason jars of placenta packed neatly at the bottom of my chest freezer.

I have always been a fan girl for death. My parents have letters that were sent home from kindergarten teachers concerning my vivid depictions of death in kindergarten coloring assignments. If you recall the 80s, there was a fog of fear regarding the frequency of kids being snatched and murdered and abused in basements. To be fair, Adam Walsh’s son was kidnapped and decapitated, and they JUST found Jacob Wetterling’s bleached bones in a field in 2016, so I can understand the concern. As fears mounted, rural upstate New York was not immune to the hysteria. In lieu of educating and training local teachers and local law enforcement on how to detect child predators or obvious signs of abuse, South Jefferson Central Schools decided to go undercover and let kids blow up their own nuclear families for them. Enter the low-key child spying program presented to the kindergarten class of 1989: Project C.H.A.R.L.I.E. I cannot remember what that acronym stood for, it does not appear in an online search and seems to have been scrubbed from humanity’s record. Or I made it all up.

During this time, my kindergarten class was introduced to one “Mrs. Denny”, who was going to help us with an “art project”. This art project was an empty coloring page with a line drawing of a sad monster. I have been unable to locate this in my personal archives, being certain my mother unceremoniously destroyed the evidence, but imagine something like the below image: 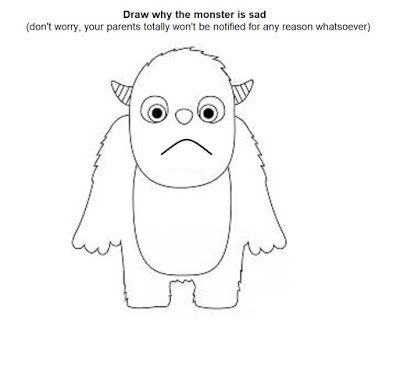 We had to color it in with details as to why the monster was sad. The trap was set. They were hoping to catch a child diddler or abuser based on what the kid subconsciously thought the monster was sad about. The idiot five-year-old next to me drew a fallen ice cream cone next to his monster. Lame. Not to be outdone, MY monster was going be in some real shit. Knowing I was going to ace this assignment, I designed my drawing like this: 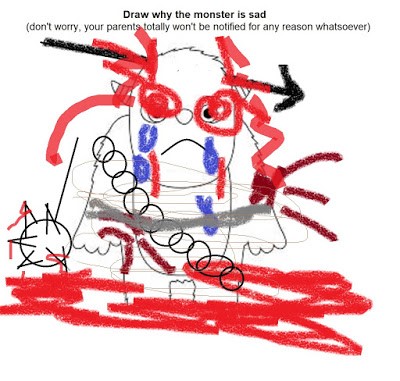 Allow me to elaborate on the details. My monster was sad because: he was chained up with chain AND rope, was mortally wounded in several arterial locations that were now gushing blood (side note, I didn’t know about arteries in kindergarten, yet instinctively knew blood comes a-gushin’ out), medieval weaponry that I took care to cover each individual mace spike with blood drips, and, the coup de grace, my monster had big, fat tears to really drive the point home that he was, indeed, sad about his current predicament. Nailed. It.

Imagine my shock that afternoon when BOTH of my parents met me after school that day. Apparently, there was a phone call with school administration about my life at home and several uncomfortable questions later, it was ruled I had an “overactive imagination”.

My parents had concern, and a hint of condemnation, in their eyes when they sat me down at the table to kindly advise me to “cut the shit”, lest I become a ward of the state and send them to prison.

And so, I transitioned into a “normie”—someone who doesn’t care about death and all her glory, that is until I broke free of society’s expectant gaze and found fellow freakshows in college. Eventually, I ended up on a search and rescue team in the cadaver unit, searching for human bits in forests across New England, ever looking for new training material for my collection.

And that, Your Honor, is why the officer found a severed toe in an icepack in my trunk.

Amanda Briggs spent her early career as a linguist only to disappoint her parents when she realized she hates linguistics (aka the “math” of the word industry). She now wanders the countryside like a stray cat managing Facebook accounts for dive bars. You can read more of her ramblings at 95luftballons.blogspot.com.

Béla Kiss Goes to the Theatre

... The ticket is to a theater near the Sacred Heart of Montmartre ...