I See You (Excerpt)

Some nights I’d whisper to God. Vague, grey prayers. I’d tell myself he was listening, even though he never whispered back.

I always hated Uncle Ray. My first memory of him was the Fourth of July in my backyard. I was maybe seven. He squatted down in front of me and put his round oily face close to mine. “You want to go on a snake hunt?”

I shook my head.

“What, you scared of snakes?” His hand reached onto his belt and pulled out a pair of pruning shears. “They won’t bite ya. I’ll snip their little heads right off.”

I began to cry.

“What’s a matter darling?” He put four fat fingers against my cheek, his thumb beneath my chin, pressing lightly against my throat. But then his eyes snapped to the ground and he hopped upright. “Oh shit!” A tiny brown and yellow garter wound through the grass by our feet. “You scared of that?” He lifted his boot and stomped hard on the thin curling body. “Nothing to be scared of, sweet pea.” He raised his foot. Half the garter’s body was squished flat into the grass. Tan and red mush squeezing out its sides. Its head and front few inches still moving, still trying to slither away. He stomped on it again and I ran away screaming.

Mom came and found me and asked what was wrong but I wouldn’t ever tell her.

Mom was super pissed I forgot Tasha at the bowling alley, so she grounded me for Fourth of July. Which may have been her plan all along, since all month she’d been talking about how she wanted a family-only day. So it was just me, her, Tasha, Grandma and Uncle Donnie. Donnie was cool, and when mom was out of earshot he’d tell us about when he and Mom were “real hood” and how they’d get into “crazy trouble” back in the day. It only ever amounted to tagging up the bridge or shoplifting, but Mom hated him telling us that stuff. We just thought it was funny. At the time I didn’t understand why telling us those stories made Donnie so giddy and light, but maybe I do now.

Mom grilled up burgers and dogs, then went to the front of the house to smoke a joint with Donnie. Night fell and fireworks blasted over our heads like a weird and beautiful war, driving the dogs and coys crazy. I gnawed on some Ativan Tyler had given me. It was like light warming me from the belly outward, making the world soft and bearable.

My parents took me to the commons to see the fireworks. The sounds and bodies—sweaty and white, huffing smoke and viruses—compressed the world and I opened my lips into a slit because my nostrils couldn’t suck enough air alone. Kids from school kicked soda cans at each other. A man in a shirt reading WHY THE F*** DO I HAVE TO PRESS 1 FOR ENGLISH twirled sparklers above a baby. A woman with knives in her face lifted a shrieking daughter off the ground by her wrist.

The sun drowned behind the mountains and the sky went bloody then black. I covered my ears with my palms. Glass splinters burst out from circles in the voided ceiling—red, gold and blue, dissolving in a slow fall back to Earth. They frightened me, but also felt like something deep in my body, something I didn’t want to let go of.

It was over in thirty minutes. The commons drained, and my parents talked about how it was a good one this year, but to me it just felt like every day.

“Well holy shit.” Ray pulled me in for a tight hug, then held me out at arm’s length, looking me up and down. “Goddamn, you’ve grown up.”

Dad pushed between Ray and me and squeezed my shoulder. “Come help me pull the grill out.”

The garage birds were chirping away and popping their heads out above the nest—still young but almost grown now. “I think they’re robins,” Dad said.

He pulled the tarp off the grill and turned to me. “I’m sorry about that.”

“He doesn’t have much since Marnie passed and …” He just trailed off.

“Alright. Let’s get this over with.” We dragged the grill, scraping it across the concrete. The robins peeped frantically above us. Dad shushed at them. “We ain’t coming for you.”

Two of the fledglings jumped from the nest and flew from the garage to our house, landing on the tin roof, still slick from a morning shower. They each slipped down the roof, young wings and toothpick legs flailing, scrambling for traction. I let go of the grill and ran to the side of the house, cupping my hands out in front of me.

The first bird slipped out over the roof’s lip, falling just in front of my hands, smacking against the grass. The second fell, and I didn’t catch it either. They lay in the grass, feet coiled and wings splayed, twisted broken and huffing air rapidly. Dad walked up behind me and squeezed my shoulder again. “I think they’re dying.” Ray came up next to us and laughed. “Hey! Throw’em on the barbie!”

Just being here kills everything.

Summer burned fast. We went and shot more footage for the video channel. Didn’t find anything, but made some cool videos of us freestyling. Tyler said he wanted to go swimming, so we biked over to the Lily Williams Bridge. It was a steep slope to the water but there was a half-beaten trail winding down, so we tossed our bikes in the bushes and slid down on the dirt and rocks. We reached the bottom, and Tyler stopped and just stared up at the bridge.

There was a lump hanging down from a rope. Too far up to make out. “Yeah,” Tyler whispered. “That’s right.” A police horn blared from the bridge. We scrambled back up the slope, grabbed our bikes and rode out.

We found out later that Tina the Teen Mom Dropout had called it in. She thought a bag had fallen over the side and didn’t want it to drop on a kayaker or something. She was wrong. It wasn’t a bag.

His clothes were dried-hard with clotted blood, mud, and clumps of animal fur. He’d been hanging there long enough for his face to crumble apart. They had to ID him from dental records. Trevor Wright.

That night we got drunk and held each other close on the gross couch. I put my head on his chest, feeling his heart stutter through his ribs. I kissed him just below the nipple. His skin tasted like sweat and ash. I imagined his body going dry and stiff, coming apart, rendered unrecognizable by carrion. His body reduced to something alien and insubstantial, falling through my fingers like slush.

“If I die here,” Tyler said, “don’t let them put me in the ground.” I tightened my arms around his skinny frame. “Bury me in the river.” He said that that would be the only way he’d know he escaped.

Church was a mirror of home—the building stretched and distorted into ever-widening spaces, copies of my parents filling the pews, all sharpened blue knives just under their skins. Pastor Wright took the podium before a shredded red, yellow and blue window showing a man with a circle around his head and his right two fingers raised.

“You all know about my son,” he said, his lips sucking at the podium microphone. “I know you do. My own flesh and blood, who last week defied the will and order of our savior to commit the unthinkable. My son Trevor’s act taints not just me and my wife and surviving daughters, but it casts a stain on all of you as well.

“My son was a lost and uncommitted boy, and his lack of commitment reflects a lack of commitment in our community.” He slapped his palm against the podium. “Don’t think I don’t see you. You come here today and you repeat the hymns and shout amen, but don’t think I don’t see who you really are, and don’t you dare think our Lord doesn’t see you as well.

“Trevor was baptized at 10 weeks, like all my children. But unlike the others, he spent his short life rejecting both the will of myself and the will of God. He was lost, and no amount of my shepherding, without his own resolve, proved sufficient to bring him toward the light.

“A person who does not believe that Jesus Christ is God, that his sacrifice is enough to pay for sins, they die in their sins. And if you die in your sins, well, let’s see what happens to you. Hebrews 9:27: ‘And as it is appointed unto men once to die, but after this the judgment:’

“So you see, you only die once. You only live once. There is no reincarnation. Some people will say ‘Well, maybe you come back.’ No, you don’t. You live once, you die once. You only have one chance in this life, and then you’re judged. And if you die without believing in Jesus Christ, if you die defying Jesus Christ, you die in your sins. So if you die in your sins and you’re judged, what happens next? Turn to Mark Chapter 16 Verse 15.

“Okay? Is it clear yet? Is it getting clear what happens when you turn your back on Jesus and die in your sins?” His voice growled into a buzzsaw. “You go to Hell. That’s what happens. You go to Hell. Like my son. But that isn’t the end of it. And we’ll see here what my son’s final place will be. Turn to Revelation Chapter 20 Verse 11.

“'And I saw a great white throne, and him that sat on it, from whose face the earth and the heaven fled away; and there was found no place for them. And I saw the dead, small and great, stand before God; and the books were opened: and another book was opened, which is the book of life: and the dead were judged out of those things which were written in the books, according to their works. And the sea gave up the dead which were in it; and death and Hell delivered up the dead which were in them: and they were judged every man according to their works.'

“What are the works of those who defy Christ? What do you imagine were my son’s works? How might he be judged? Where is he fit to reside? Again, Revelations Chapter 20, Verse 14.

“And that’s where my son is. As in Psalm 9:17: ‘The wicked shall be turned into Hell, and all the nations that forget God.’ And that is you. I see you. You hide behind your grinning masks but I see you. And God sees you as well.” 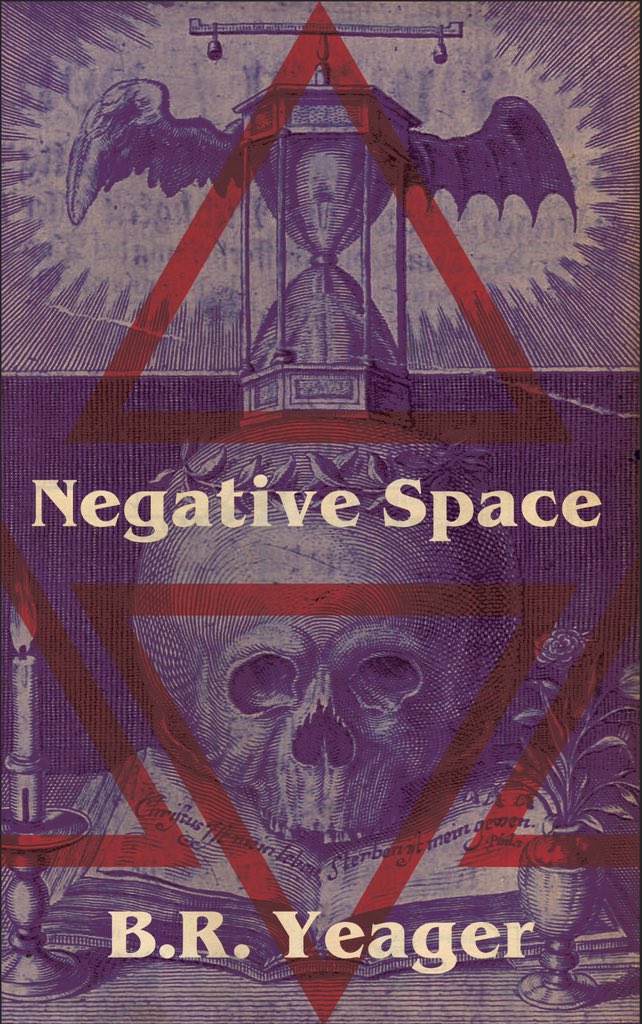 B.R. Yeager reps Western Massachusetts. He is the author of Amygdalatropolis (Schism Press).

... The abuse that so many people suffer through is terribly under-discussed in today's world. It is beginning to change in some positive ways, I hope, but there is a long way to go with the general perception of that ...

... Previous translations did the job of converting the ancient Chinese into English, but to Le Guin, they felt awkward and clumsy; the beauty and elegance of the poetry in the text was lost ...