from “From a Greyhound”

So begins section two of Marc Alan Di Martino’s second collection of poetry: on a Greyhound zipping alongside the swamps of New Jersey. It is a quiet poem, but one that nonetheless crackles with a child-like excitement. To peer out the window alongside Di Martino is to look past the industrial hell of our own creation and into a gorgeous vision of ­­­­­­urban mythologies. It is to see smokestack dragons spitting fierce plumes into the air. It is to see crowds of people reduced to nothing but ants. Through Di Martino’s eyes, a city is a playground of quartz, a tiger, a dollhouse, and great Camelot itself, rife with adventure. This poem, much like the collection as a whole, is a homecoming to the New York City of Di Martino’s youth.

Anything but still, Still Life with City (Pski’s Porch 2022), takes you by the hand and whisks you backstage into New York City’s breathless underworld of “tramps, vamps, and Frankensteins.” It is, at once, a dazzling performance—of intellect, of the fast-and-loud lifestyle, of the self—and a tender contemplation on the fabulous fictions of youth.

“There is no rest” Di Martino writes in “Second Self”—after all, how can one rest in a city which refuses the very suggestion of sleep? A city teeming with Harvard-educated artists, 24-hour discotheques, and open mic nights? How can one rest when there is always more work to be done in order to afford a six-pack of beer, a quick slice of pizza after work? What Di Martino constructs here is a mythos of the modern artist moving through a uniquely fast-paced and tumultuous era. For the artist, the city is not only a home, nor is it simply a muse. It is an ever-shifting maze, and one’s personal identity must evolve rapidly to accommodate the fast-moving lifestyle. In spite of the mask of adulthood, there is always more to learn. No matter how familiar the walls become, both the city and the self remain an enigma. They are things to be navigated. With such compasses as David Foster Wallace, Henry Miller, and Charles Bukowski, our hero moves through “block after block after block” of exploitation and addiction, managing to hold onto his faith and his sense of wonder no matter the circumstance. One place this is clearly illustrated is in Di Martino’s exquisite use of verbs to describe even the most mundane and gross parts of life. In “Crawlspace,” for instance, breakfast cereal laden with insects creeps from its bowl. In “The Existentialist of Nassau Avenue,” the speaker “rupture[s] with humanity” over a pubic hair in his crab rangoon. In “Caravaggio Was Our Matchmaker,” poetry adorns.

The poems I wrote you, too, were of inferior metals

melted down and cast into new forms. Today they adorn you

in this bright band.

—from "Caravaggio Was Our Matchmaker"

Even in the aftermath of “our terrible future,” as is outlined in the titular poem, when the book swings down into its most contemplative in a post-9/11 America, Di Martino’s language is rich, saturated with irresistible flashes of sound. The verse is haunted by the ring of unanswered telephones. Shadowy whispers populate the avenues until we are left with nothing but “the silence / of the loudest city on Earth.”

But New York is not the only city in this still life to be rendered in such fine detail. From live shows in Dallas to the snow-covered lawns of Mystic, Connecticut, Di Martino chronicles experiences and captures the character of each place he visits. And this collection is not limited to the Americas, either. In the stand-alone four-page poem comprising all of Section 3: Passages, our protagonist is back on a charging train. He is on yet another adventure, leaving behind the unique struggles of the cities of his youth in favor of the Rome of his paternal grandmother. He has grown older and more reflective, yet he continues to paint the places he visits with a tender hand, cataloging their beauty before they are destroyed to make way for tchotchke shops and war machines.

The meaning of these photographs is absence.

—from "Her Mother's Clothes"

In short, Still Life with City is a collection bustling with life even in grief. It is an exploration of art—whether it be poetry, punk music, or great paintings of yesteryear—and how it empowers us when we are at our most vulnerable. To be an artist is to create in spite of tragedy, attempting to preserve a still life which is impermanent by nature. 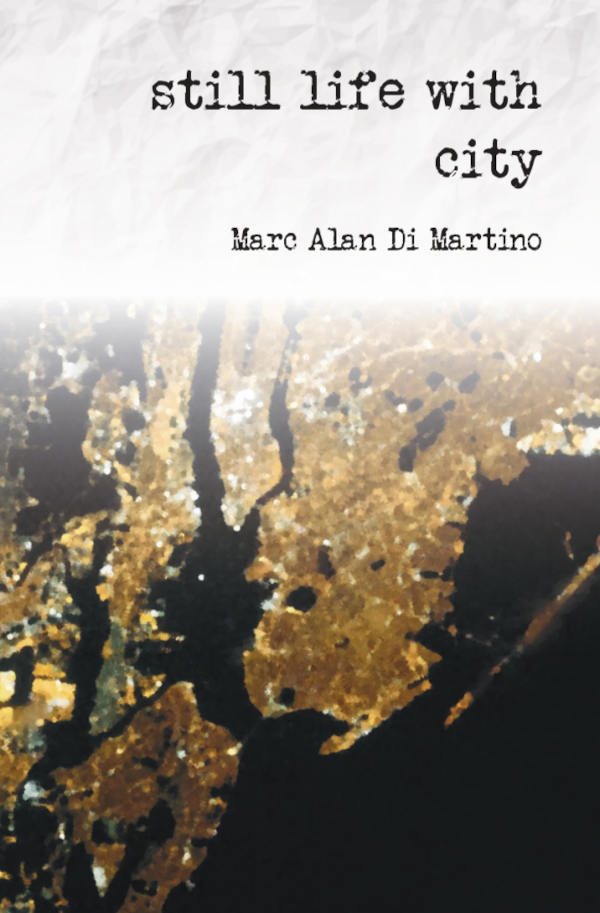 Ashley Wagner is a poet, editor, and essayist whose work has appeared in Grub Street, Up the Staircase Quarterly, and Salamander. She enjoys reading all forms of creative writing, from poetry to creative non-fiction to genre-bending short stories. She is a Maryland native and tweets @ashley_dawn_w.

... she leaned toward a little mirror and set the makeup brush aside ...

... a dark splotch resembling a marble caught in black velvet ...